THIS IS BUSHWACKER!!!
Mike Lee got the final ride on the legendary bull in his last performance.You can tell this isn’t any ordinary night.We can hear Hells Bells from AC/DC blaring,and all eyes on Bushwhacker –
This night is like a Derek Jeter moment-saying goodbye to a legend -yet one more game to play.

This 1700 pound Athlete and  Son of Famous Rank Bull Reindeer Dippin was born in 2005. 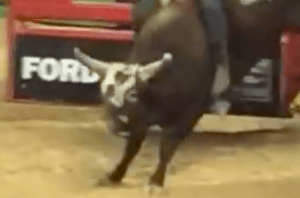 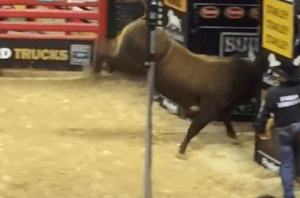 He hasn’t bucked since winning his prestigious third world title.
He handled all the PBR’s best riders over  60 times in his “Built Ford Tough Series” career.

It’s been Almost a year since Bushwacker’s retirement from the PBR, yet owner Julio Moreno still thinks his bovine athlete has what it takes to still be the best and actually could beat out the top competition.

“I think about it and I ask myself, ‘where would Bushwacker be?’ I kind of ask myself that,I think he would still be ahead of them. I really do. Just walking through my ranch and calling for him. Looking at him, he has those muscles that catch everybody’s eye.”

Instead, Moreno has focused on letting Bushwacker enjoy the fruits of his six years of labor on BFTS.
Such is life as a World Champion Bucking Bull.These days, Bushwacker’s seed is more valuable than truffles.

Only the best cowboys in the world would ever ride bushwacker. Try to ride him. Only two dudes succeeded, going the full eight seconds on Bushwacker; the last time was over 5 years ago. Forty-two times since then, cowboys had climbed on his back. Almost immediately, all of them flew into the dirt. That’s a PBR elite series record. For his work, Bushwacker earned nearly $500,000 in his career.