No other bull is as well known as Bodacious.
The Yellow bull called Andrews Rodeo’s Dodge Bodacious was a 3-time world champion bull.
The Bull is probably best known for his battles with Tuff Hedeman, Ty Murray and all the greats from the 90’s.
CLICK PAGE 2 BELOW FOR BODACIOUS SONG AND VIDEO TRIBUTE!
Bodacious (1988 – May 16, 2000) was a Charbray bull who was known not only in the sport of rodeo but the whole world took notice at every appearance.
Bodacious was best known for his head-butting move.
In 1995 NFR, he deployed it most famously to Pro Bull Riders Scott Breding and Tuff Hedeman. 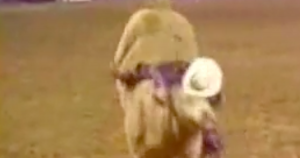