Check this Bull Ride and Rider out!  Model & Cowgirl Had Guts & Beauty!!!

This segment was  produced and broadcast by Animal Planet as part of their untamed and uncut series.
Denise Luna’s life may have  been  the ultimate mix of glamor and grit.  In the late 1990’s, Luna was Ranked among the world’s  best female bull riders by the Professional Women’s Rodeo Association.The 5’6″, 120-lb. Texas resident was also pulling in $25,000 a year digging her heels into a modeling career for Wrangler jeans, Bud Light and other clients.

That’s if her other career—the one involving 2,000-pound beasts-didn’t do permanent damage. The fashion world was worried about a wreck like this. A fashion photographer once said this:”If I had my way, she’d wear a protective helmet and a mask,” says photographer Strout. “One hoofprint could ruin her face for life.”

Luna, fully aware of the danger (one of her idols was  Lane Frost, who died in a bull-riding accident in 1989), did use the protective vest worn by most bull riders, but declined the lacrosse-style mask. “I’ve heard that the bull’s horn can get hooked on the mask and snap your neck,” she once was quoted as saying!!(we wonder what she would do now!!!)

click video on  Page 2(next) at bottom of page 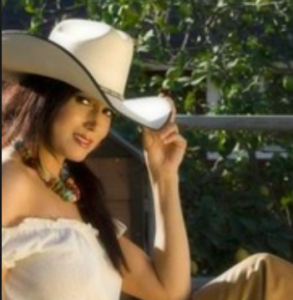 The women were a tight knit group: “We’re all really close,” says Tammy Kelly,  the former top-ranked bull rider. “We’ve gotta be, ’cause there’s only a few of us.” They shared long drives and hotel rooms during the 40-event season.
“We get a lot of the ‘You should be barefoot, pregnant and in the kitchen’ comments,” Luna says. “I answer, ‘When I find a man who gives me as big a rush as I get from a bull, that’s when I’ll quit riding.’ That usually shuts ’em up.”!!!

Luna got her start in rodeo when she tagged along with a male friend on his way to bull-riding practice and talked the other cowboys into letting her ride a bucking steer. To their surprise, Luna “covered” the steer, riding the eight seconds required in men’s competition. (For women it was six.) “The only problem was I didn’t know how to get off,” she recalls with a laugh. After practicing for a year, Luna got her PWRA permit and hit the circuit.