“I Watched it in Live Speed, it is Violent Looking. It’s a Wicked Crash”-Austin Dillon

Dillon saw photos and replays of the airborne crash, which tore down a 60-foot section of the Daytona catchfence.
“I looked at photos, I looked at fans’ videos on YouTube. I’ve looked at a little bit of everything, like I said. At first after getting through the infield care center, I didn’t know if I wanted to watch it. After I took a shower, cooled down, I was like, ‘All right, here we go, let’s start watching them.’
“I watched a lot of videos, and just watching it in live speed, it is violent looking. It’s a wicked crash. When you see the fence, the thing just blows apart. But for me, I think it kind of set in when I got to talk to my brother (Ty). I already got into the infield care center, I was pretty much fine. I wasn’t shaken, and I was just kind of telling my parents, ‘I’m OK, I’m OK,’ and talking to them. You could see how upset they were, and I hadn’t seen the real footage of the wreck. I knew it was bad but I didn’t know how bad.”As much as their loved ones don’t like the risk associated with it, they have to accept it also. It goes with the territory, just like in football or any dangerous sport. In any high-risk sport you want to be good in, you must accept that risk.”
On His Speed:”I’ve heard numbers. I don’t know ‑. I heard 198 from one of my friends. I’d say you’re anywhere between 190 and 198 is probably accurate.” 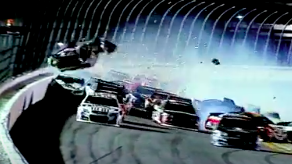 Austin Dillon’s car is clipped and flipped into the air.Source: AFP 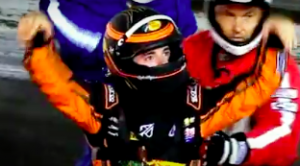 “But it’s fun to kind of look back at the way I have now because that was a really crazy wreck and just got to thank NASCAR and the good Lord above for taking good care of me.”-Austin Dillon