“This is a Special Animal” Magic Train Contractor Matt Scharping

Check out PBR Bull Rider Kasey Hayes taking a ride on Magic Train for a bit longer than he expected!-Picking up BullFighter Frankie Newsome along the way!
Jared Allen’s Pro Bull Team takes pride in the bull’s ability to displace riders on the BFTS Bull Riding Events.
Other than Kasey Hayes and his 87-point cover- at the BFTS event in Tulsa, Oklahoma
(WHICH IS  A WRECK FOR THE AGES AND IS THE VIDEO ON THIS PAGE)
Magic Train has been a difficult and unpredictable bull for many riders. 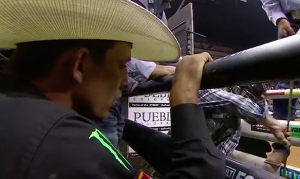 J.B. Mauney Looking on From the Chutes

Sadly,Magic Train,despite the buildup and great year in 2014 and even the fact he’s barely been covered,his star appears to have faded as a competitor.To this observer and using the PBR 2015 Finals as a backdrop- these twisting bulls with unorthodox styles don’t get scored well.PBR Director of Livestock Cody Lambert said Magic Train has not looked like the bull that once caught some early attention last year.“Magic Train was decent, but he isn’t as good as he was last year,” he said. “When they bought him he was a little better bull than that, but sometimes they turn out that way. I don’t think they have done anything wrong with him. He doesn’t have a good pattern where he gets scored a lot every time even though he is pretty hard to ride every time.”
Scharping understands that Magic Train is probably no longer Champion Bull status-But he loves His bull’s intangibles. The smaller bull has “springs in his feet” and is “trying his guts out” every time.He added that he and Allen are not disappointed in the bull, and Scharping is committed to trying to help define what makes him buck at his highest potential.
Whatever his eventual pedigree and accomplishments- one thing is certain…this is a Special Animal! with a special bond!
Share with PBR &  Bull Riding Fans! 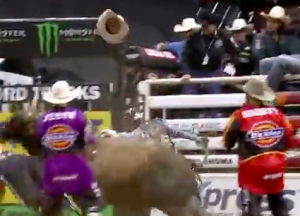