Check out Kasey Hayes on Mississippi Hippy: Ending his unridden streak in 2014!

Imagine Andre The giant as a bull- This is Mississippi Hippy!
The average bucking bull is 1400 to 1800 lbs- Hippy is a carefree 2400 lbs!
Mississippi Hippy is not only close to 2,400 pounds, but he stands 6-foot-4 inches to his hump! 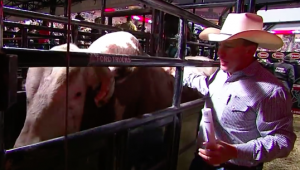 Mississippi Hippy retires with an average bull score of 43.78 points.
He also competed at the last four Built Ford Tough World Finals.
This bull has a huge fan club and it’s easy to love this super sized teddy bear of a bull.
This ride is a famous ride for PBR fans and those that follow bull riding.
It is from the BFTS  championship round of the 2014  Des Moines Invitational in Des Moines, Iowa.
Mississippi Hippy had bucked off 23 consecutive riders on the BFTS to begin his career before Hayes rode him for 88.5 points.
Any cowboy to last 8 seconds on this bovine truck of a specimen -instantly becomes their defining moment.
Only 3 PBR riders ever rode Mississippi Hippy to 8 secs In BFTS: Kasey Hayes, Eduardo Aparecido,and Nevada Newman.
Hayes remembers how much of a struggle it was to find any room for his feet inside the bucking chutes.
Every time Mississippi Hippy turned his head to the left or the right, Hayes could feel his opposite foot getting smashed against the steel:“I couldn’t really get my feet down that well, so I was like as soon as that gate opens I am going to drop my feet and get a hold because I definitely don’t want to be behind on that big son of a gun.”

Listen to owner Kenny McElroy:”I think his size has a lot to do with it,” McElroy said. “Let’s face it. For a bull as big as he is, to be that athletic is pretty uncommon. I think his popularity comes from his personality. People see that just because he is over 2,300 pounds, an animal can be as rank as he is in the pen and can turn around and be like a pet.”
And listen to what it’s like to ride this monstrosity:“I mean he felt like he bucked a heck of a lot harder than 88.5,” Hayes said. “He is so big and he is so hard to ride and the judges kind of underestimate him because he doesn’t really look like he is moving that fast, but I look at my still shot pictures or something and as big as he is, that bull is still kicking straight over his head. He is so big that when you watch him you are like, ‘Well, he is not really bucking that hard,’ and you slow it down and you are like, ‘He is bucking that hard.’ He is kind of deceiving really.”
Hippy was forced to retire due to a hip injury sustained last week at Iron cowboy.
“It is a true statement that cowboys, stock contractors, and people in the PBR, is a family,” Owner McElroy said. “His following is just incredible. It is truly amazing to see the outpouring from all of the people. I’ve had preachers reach out to me on Facebook and say they have been praying for me in their church services. It has totally been crazy. It has been overwhelming because you really don’t realize how many people in this country are animal lovers.”
“We rarely see a bull that big in bull riding or anywhere, even in the days before the PBR when there used to be a lot of 1,800 to 2,000-pound bulls,” said PBR’s Director of Livestock Cody Lambert. “You rarely see one that’s close to 2,400 pounds, I can only think of about three or four in the years I’ve been around bull riding. He’s one of the biggest ones I’ve ever seen in the bucking chutes.”
Mississippi Hippy your large lovable presence will be missed and you left a large footprint of remarkable grace and beauty.
Get well and enjoy the pasture…
Share with those who love Larger than Life Bulls!
(check out JW after the ride standing next to this superhero of a bull-unreal!)