JB Mauney stopped by the tv set for an interview and a demonstration of bull riding.
With the PBR in NYC for the first major PBR event of 2016, JB Mauney found time to talk about bull riding and discussed his background and how he came to learn bull riding.
Professional bull rider J.B. Mauney gives Stephen some insight into the world of Western sports.
PBR’s brightest star under the bright lights of the big apple. 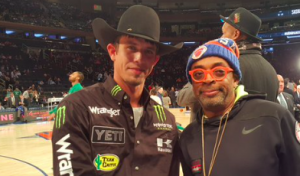