Check out The Best Tribute to Lane Frost You Will Ever See! Rare and In Depth Footage Including Lane’s Last Ride @ Cheyenne. This One has it all!!!

This tribute was made by the NBC Sports Weekly TV show ” The Sports Machine” and Aired in Early August 1989. It was made 1 week after Lane died. George Michael,the host of the TV show was doing a profile on  Lane Frost  and had been doing a series of interviews and covering the Lane Frost Phenomenon leading up to Cheyenne 1989.

After Lane died- they paid tribute and broadcast this Comprehensive Video  of Lane’s Career highlights. What’s incredible is all the interviews and footage you will never see again.Watch Lane and Tuffy like you have never seen them!

This Awesome Tribute does contain the actual footage of Lane getting hit and having his ribs broken(and subsequent passing) by the Bull Takin’ Care of Business .(2:20 spot) but it’s worth Enduring the Pain and sorrow of watching… 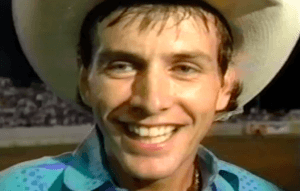