This clip is from the “The Sports Machine with George Michael” and by 1995 Bodacious was already a legend,
known as a Feared Dangerous Champion Bull- But that didn’t stop Tuff…YET!
Tuff has called his cover of Bodacious (95 pt score at BRO event in Long Beach, California in 1993)  his Greatest-and he has called this ’95 PBR Finals Ride on Bodacious from Las Vegas- The most dangerous of his career!
As you’ll see Tuff is left Battered and Bloody (tuff incredibly walks out on his own power) and made a vow after this ride to his son that he would never ride Bodacious again.

As you will see Tuff is jerked down by the Yellow Bull upon exiting the Chutes and Struck his Face on the Bull’s Head, shattering every major bone in his face. He required several hours of reconstructive surgery for his face, and less than two months later, he was riding again. At the National Finals Rodeo (NFR) later that year, he ended up Drawing Bodacious again, He decided to turn him out – getting off of him when he left the chute. He then tipped his hat to him and received a standing ovation for his decision. He did this at the request of his son….

CLICK THE NEXT PAGE BELOW TO SEE THE RIDE 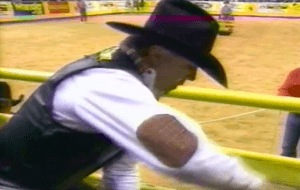