The Super Bowl of Bull Riding is the PBR Finals. Just a few years ago J.B. Mauney was a newcomer and a new force.
James Burton “J.B.” Mauney was born January 9, 1987 and is 5 feet 10 inches tall. Mauney, known as the Carolina Cowboy, is from Mooresville, N.C.J.B. worked his way up but it didn’t take long for this left-handed rider to make his presence felt.
His first season was in 2006, and he finished 25th in the world standings and won the Rookie of the Year award.
He finished in 3rd place in the 2007 BFTS World Standings behind Justin McBride and Guilherme Marchi.
In 2008 he finished 2nd behind Marchi.
In 2009 he finished 2nd again, this time behind Kody Lostroh. However, he achieved history at the 2009 PBR World Finals when he won the event by becoming the only man in PBR history to ride 8 bulls at the Finals.
The bulls he rode were Chester,Troubadour,Crosswired (who fell down; Mauney did his re-ride on Black Smoke), Ricky Bobby, Beer Goggles, Live Wire, Smack Down and Black Pearl.
The 2nd Video on the next page- from the 2009 PBR finals- is part of that streak.

There’s a great story about how J.B came to ride Troubadour at the 2009 finals.
Tim Mauney, J.B’s father told him to draft Troubadour instead of Copperhead Slinger, which PBR points leader Guilherme Marchi drafted ahead of him and rode for 92.25 points and 2nd place.”It was a tossup between the two bulls, but I figured I could get a few more points from Troubadour,” Mauney said. “I don’t like picking them. I just want the one that’s ranker.”
Mauney  dreamed of becoming a world champion since he was a boy, but the injuries he sustained in a local event in 2005 gave him added inspiration.After spending several days in the hospital, Mauney missed four months of action and was forced to get a job taking machines apart at a ball bearing factory.
“I couldn’t ride, so I had to get a job. That was the most incentive I needed to ride bulls good,” Mauney said. “After two weeks, I told my dad whenever I got back, they’re going to have a hell of a time getting me off, because I’m damn sure not doing this for the rest of my life. I just couldn’t take being inside all my life.”
True to his word, Mauney, has been tough to buck since then.
J.B was determined to be the best & He’s not happy unless he’s the best. 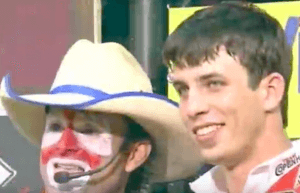 CLICK NEXT PAGE(2)BELOW FOR VIDEO OF J.B. VS. TROUBADOUR