Check out Mick E. Mouse Bucking off J.W. Harris in one of his last rides Ever-From PBR

2015 will always be remembered by Bull Riding fans as the year of Mick E.Mouse.
This bull was loved as a remarkable athlete as well as a tender soul.
We chose this ride because the pre ride -ride -and post ride are as great a eulogy and celebration as we could possibly tell.
Listen closely to what Ty Murray says during this broadcast-its the stuff of legends!
Watch Mick E Mouse  rip high into the air to slip JW Harris down over his front end with his brute strength – getting completely vertical in the process! (page 2 (click below) has the Incredible video of the ride-including slo mo)

Once the gate flew open, up jumped owner Marlene Henry from her seat as her talented pride and joy made Harris eat his words for wanting a piece of the unridden bovine athlete at the Ty Murray Invitational in the spring  of 2015, tossing the No. 4 ranked bull rider in the world to the dirt in just  2.97-seconds! 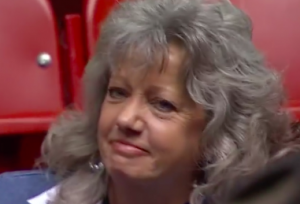 But listen to the broadcast in what can only be described as a celebration as Ty Marvels at  this legendary Bull!
This bull had an aura of greatness and everyone knew it.
We can’t think of a better eulogy for Mick E.Mouse than this broadcast.
Mick E Mouse had done it again. Made  it 33 consecutive buckoffs on the Built Ford Tough Series.

“That is a rank bull,” Ty Murray said. “I was able to slow down some footage of him and the thing that makes him so rank is that he has everything Long John has and 10 times more. I have been watching this bull for a long time. He changes it up. He is jumping while he is kicking. He is leading with his head and he is belly rolling. It is like he does 10 things at once!

Click Next Page(page 2) Below for a Mick E. Mouse Video you won’t ever forget!

“He was definitely in contention for Bull of the Year. That is really sad to hear. Actually, any time a bull gets hurt it’s sad.. No one ever did ride him. That is something to say. We all wanted to be the one to do it.”-PBR Bull rider Matt Schaper
Mick E Mouse concluded his career with a 34-0 record on the Built Ford Tough Series.
His 34 consecutive buckoffs are the third most in PBR history and he was never ridden in 40 outs at all levels.
“I was just talking about him (a few days ago) and I realized out of all the bulls I can think of, he is the only one in my lifetime that went through a PBR career, where he is going against the best riders, and no one rode him,” Lambert said “The difference is a contender for the PBR championship only goes against the best riders of his time. That is all Mick E has gone against. Out of all the bulls, that is a PBR record that he holds. He competed his entire career in the PBR and was never ridden.”
Mick E Mouse also bucked off every rider  ranked inside the 2015 Top 10 of the world standings except for rookie Kaique Pacheco and Fabiano Vieira.
“He was good enough where he could have won the championship three times right now,” Lambert said. “The only problem was Bushwacker and Asteroid were there.”
Lambert added that even though Mick E Mouse never won a world title, he almost certainly will be a future inductee to the PBR Ring of Honor as a recipient of the Brand of Honor.
“He won’t win the World Championship, but in my mind he will win the Brand of Honor (in the future) where he is a legendary bull that is awarded for his entire career and body of work,” Lambert said.

“I would never be pinned down to say who was going to win it, but it was obvious Mick E Mouse was going to win it,” he said. “The only way the other great bulls – Long John, Air Time, Smooth Operator, Percolator – were going to beat Mick E Mouse was if something happened to him.. ”
Out of his 40 buckoffs, Mick E Mouse dominated four PBR World Champions and two PRCA champions. He has bucked off 2013 World Champion J.B. Mauney, 2008 World Champion Guilherme Marchi (twice), 2004 World Champion Mike Lee (twice), three-time World Champion Alves, four-time PRCA champion J.W. Harris (three times) and 2011 PRCA champion Shane Proctor (twice).
Henry and Loudamy never shared their intentions publicly, but prior to Mick E Mouse slightly fracturing his back in Billings, Montana, this past April when Nathan Schaper was attempting to ride him, they had developed a plan with the ultimate goal of Mick E Mouse breaking Bushwacker’s all-time BFTS record buckoff streak at the 2015 Built Ford Tough World Finals.They were both confident that Mick E Mouse was getting stronger and capable of breaking the three-time World Champion Bull’s record on the final day of Finals.
“Breaking that streak was our goal,” Loudamy said. “That was our goal- We were just going to go for it and see what is there.”
Schaper ended up being the last rider to ever attempt Mick E Mouse.

Mick E Mouse was crowned the 2012 ABBI Reserve Champion and was 5-0 on the BFTS.
There was much more to come from Mick E Mouse.
By 2013, he was competing full time on the BFTS.
One by one each rider that stepped up to challenge Henry’s bovine masterpiece would be sent back to the locker room looking for answers with no easy solution in sight.
He bucked off all 12 of his opponents in 2013, before bucking off another 11 in 2014.

Henry never bucked Mick E Mouse with a dummy when he was younger and she eventually began taking him to some local jackpot rodeos in bull ridings when he was 3 years old.
At the time, she just called Mick E Mouse by his brand number, which was 81 – coincidentally, the same brand number as Dillinger.
The event organizers needed a name, even though she insisted they just use his brand number.
Finally, Henry gave them a name:
“His daddy was Mighty Mouse, so I went from Mighty Mouse to Mick E Mouse and it just stuck,” Henry said.
“I never drifted off from that and I always called him Mick E.”

Click Next Page(page 2) Below for Mick E. Mouse Video